In fall 2016, Reclaimit president Andrew Carpenter attended ECHO, a tropical agriculture workshop in Florida, where he saw the effects of adding biochar to what was essentially beach sand. The biochar vastly improved the fertility of the sand and allowed the treated area to be used for a highly productive garden. Biochar is created when various feedstocks (wood, agricultural waste, etc.) undergo pyrolysis, or heating in a low oxygen environment. This process creates an extremely porous material that sorbs nutrients, holds water, provides a perfect home for soil microbes and has been shown to permanently improve soil productivity in some conditions. Refer to Eco Community Articles for more information.

Andrew immediately became interested in the potential for this soil additive to improve the reclamation status of large, severely disturbed, sandy sites, such as those that we see at a historical oil sands site Reclaimit is helping to reclaim in northwestern Saskatchewan. Accordingly, Andrew asked Reclaimit ecologist Deanna Van Muyen to devise a trial to field test the effects of biochar amendment on jack pine growth, in addition to a few other treatments. We began installing the trial in the spring of 2017, completing the applications and planting jack pine seedlings in the fall of 2017.

As well as the biochar, we tested both established and novel soil and planting treatments including wood shavings, green manure, peat moss and fertilizer. Altogether, 1000 jack pine seedlings were planted with various amendments in October 2017.

Unfortunately, a monitoring visit conducted in spring of 2018 revealed that the planted jack pine seedlings had been severely affected by wind erosion and there was apparent widespread mortality. In October 2019 Reclaimit was able to return to the site to collect trial data. 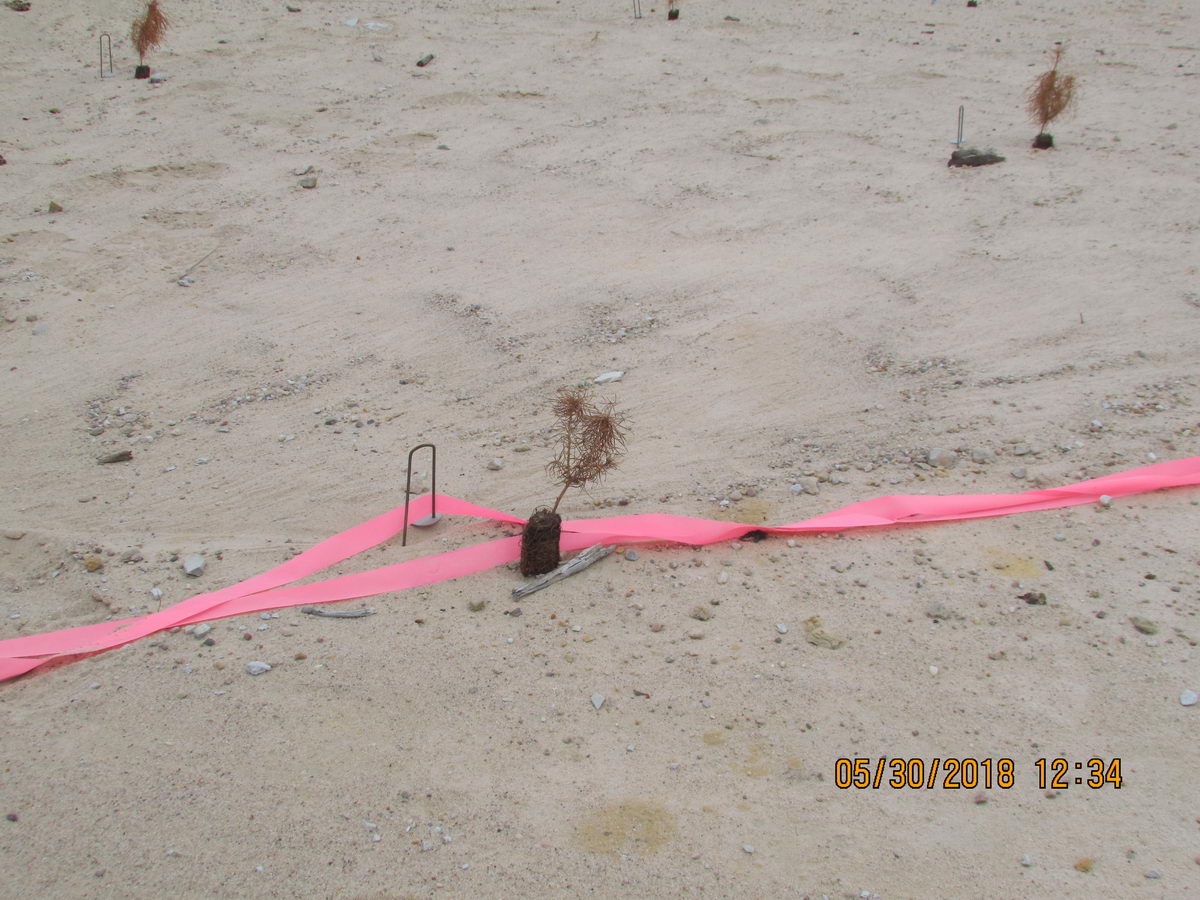 Due to high seedling mortality (60%), it was difficult to see definitive patterns in growth response of the jack pine seedlings with respect to the different treatments but we gained some good takeaways about what apparently helped the seedlings survive in these harsh conditions. The simplest solutions, such as the application of peat moss, appeared to work best while those that required surface soil disturbance (biochar, green manure) seemed to exacerbate wind erosion and, consequently, mortality. Further, we found that the plots with more initial natural regeneration had a much better survival than those without. This last point was an anecdotal observation but, along with the other observed results, contributed to a re-evaluation of our prescribed silviculture methods for windswept, sandy sites.

Our investigation of reclamation approaches for sandy sites continues. Watch for updates in future posts!

It’s the How that Matters…
Scroll to top

We may request cookies to be set on your device. We use cookies to let us know when you visit our websites, how you interact with us, to enrich your user experience, and to customize your relationship with our website.

Click on the different category headings to find out more. You can also change some of your preferences. Note that blocking some types of cookies may impact your experience on our websites and the services we are able to offer.

These cookies are strictly necessary to provide you with services available through our website and to use some of its features.

Because these cookies are strictly necessary to deliver the website, refuseing them will have impact how our site functions. You always can block or delete cookies by changing your browser settings and force blocking all cookies on this website. But this will always prompt you to accept/refuse cookies when revisiting our site.

We fully respect if you want to refuse cookies but to avoid asking you again and again kindly allow us to store a cookie for that. You are free to opt out any time or opt in for other cookies to get a better experience. If you refuse cookies we will remove all set cookies in our domain.

We provide you with a list of stored cookies on your computer in our domain so you can check what we stored. Due to security reasons we are not able to show or modify cookies from other domains. You can check these in your browser security settings.

We also use different external services like Google Webfonts, Google Maps, and external Video providers. Since these providers may collect personal data like your IP address we allow you to block them here. Please be aware that this might heavily reduce the functionality and appearance of our site. Changes will take effect once you reload the page.